2019 was my first year of competition with Gesusa Park Furst Light (Frosty) and I am very proud to be awarded the Transitions Young Rider Trophy for the 2019 competition season.

Dressage in Western Australia is so lucky to have the support of a young rider club such as Transitions to encourage young riders to achieve a high level of excellence in their training, which in turn reflects in the competition arena.

My family purchased Frosty for me in mid 2018 from Sara Price and Deon Stokes of "Stokes SportHorses". With their correct and professional training methods, the team at Stokes gave Frosty the best possible start under saddle, something that I believe is very important for a young horse looking to go all the way to Grand Prix. My ultimate dream for Frosty.

Together this year we have achieved some fantastic scores and when the training from home is able to be transferred into the competition arena, even if it is just for a moment, it really makes me excited for his future. I have two highlights from this year, the first was our achievement of our highest score of 77% at Perth Dressage’s July competition, where he was also awarded the highest score of the day and his first garland. (The showhorse girl in me still gets excited about the flowers ! )

The second highlight was his 1:C test at the 2019 Rubber Gem WA State Dressage Championships. He just completely zoned in and focused on me and we were able to bring our training into the competition arena. Even though it was only a prelim test he filled me with great hope for his ability for Grand Prix work in his future.

When you can ride a test and achieve the training goals you set at home, it is a great feeling, and to me that is what dressage is all about; continually improving and meeting goals.

I am very fortunate to have excellent eyes on the ground in my coaches, Nadine Merewether, Deon Stokes and Steph Spencer, who all guide me on this journey with Frosty, ensuring we have the correct training to bring the best out in Frosty and myself.

As I look to 2020 I am excited to train hard and develop an even stronger bond and higher level of education in Frosty.

My goal will be the same, to bring our training into the competition arena and slowly, but correctly, make our way to our dream of Grand Prix.

Chloe Moon. Dec.2019
2018 Transitions Young Rider Trophy Winner
Olive had a successful 2018 season with some fantastic scores in novice and upgrading to elementary mid way through the season. Locally, Olive won the Greenough Equine Vet Centre Overall Champion at the Geraldton Dressage Championships in August where we received $1000 in prizemoney! This was definitely a highlight as well as being awarded Runner-up State Champion Novice Horse out of a 40 horse strong field.

Immediately after the State Dressage championships (Sunday night) I flew out to Germany to complete my Trainer C coaching course at the Westfälische Reit- und Fahrschule, my third time traveling to the school in Münster. I had a fantastic 4 weeks away riding everyday both dressage and jumping, plus learning a lot of theory in regards to teaching, management and horse/rider biomechanics. I passed my exams after a lot of study, 3 riding exams (cross-country, dressage and show jumping), 2 teaching and 3 theory tests with a panel of 4 German assessors.

Over the summer Olive has been working on her medium movements and will be competing medium and hopefully advanced by the end of the year! A huge thank you to my coaches Ron Paterson and Hazel Hikins for all their support, and my wonderful sponsor Geraldton Stockfeeds for supplying my horses with all their feed and care needs with quick easy service.

While on a family visit for Christmas in Melbourne, Olive was purchased as a newly under saddle and just 3yo in December 2015. A few days after Christmas we decided to take a day trip up to Sydney to view and ride at Revelwood Stud. The spontaneous trip almost resulted in a missed flight which was completely devastating to hear, although shortly after being told we could not board we found ourselves running through the Melbourne airport at 5 in the morning. Riding boots flying out of my backpack and quite a few people slightly confused by the mad horse family bolting past them.

You could say the trip paid off as this adorable little warmblood mare was just perfect! It was so nice to meet her sire ( Pref Keur OO Seven ) and as well as David Schoobridge riding Agent de Jeu her half brother.
Olive arrived in Geraldton (approximately 5 hours North of Perth) from NSW in February 2016. Throughout the remainder of 2016 I spent the majority of the time adjusting my riding from ponies to warmbloods, just a slight change!

2017 was our first year of competitive dressage which was very exciting with lots of new experiences for Olive and myself. We attended the Young Horse Seminar, State Dressage championships and several local dressage competitions. As 2017 was my final year at school competing and keeping horses fit was definitely a challenge but with great rewards, and I am very proud to have been the recipient on the Transitions Dressage Club Perpetual Trophy.

Thank you!
My coaches are Ron Paterson and Hazel Hikins.
Sponsor: Geraldton Stockfeeds
Winner 2016
I am so delighted that one of my horses (and my rider) has been honoured in such a way by Transitions and am so grateful for the support from the club.

I am very proud of Bessie and all that she has achieved both with her own and on my horses. At only 19, she looks set to have a wonderful career with horses and is just a delight to work with every day. She is always to take advice and works so hard to improve both herself and the horses with a calm and sensitive attitude.

Up until I started working for Heidi Emery at Hermitage Dressage, I had a general background with horses and was probably more focused on showjumping and eventing. On horses that I had trained myself, I have been a member of BEATS, completed a charity ride to Kalgoorlie as well as competing successfully up to 1* eventing, including the Diamond Class at Eventing in the Park.

I had just returned from 4 months riding in the Hunter Valley at Hunters Lodge show jumping stables when my jumping coach, Nellandra Henry, recommended me to as a good option for a general stable hand to Heidi. I started at Hermitage Dressage in May 2015.

I was also bringing on my young warm blood, Padbury Park Griffindor. Heidi happened to be a competition where I was competing with Gryffindor not long after I started working working for her and was impressed with how I rode him and was developing him. As a result, she initially asked me to sit on her thoroughbred mare (Over the Moon) and then asked me to try with Stately, whom she had been slowly bringing back into full work after some time off due to a muscle injury.

Stately is a very athletic 17h plus 8 year old German Sporthorse by Rich Charly (Rubenstein/Florestan) out of Palluca (Donnerchlag/Pardon). According to his pedigree, he has all of the 'rideable' genetics”which he uses sometimes! Stately is a quirky horse and it took some time for me to form a partnership as I adjusted to riding a horse of his exuberance.

Our first outing together was a clinic with Stefan Wolfe in July 2015 and I then worked with Heidi towards our first competition start which we completed in November 2015 with a start at Novice level at the SEC for a plus 70% win. I was super pleased with Stately that day and we realised that, despite all his quirks, he LOVED being a competition horse.

I then met Martina Hannover riding Stately at a clinic in January 2016 and decided to take up her offer to head to her stables in Germany and learn as much as I could to develop my skills in my newly found focus on dressage!

I had booked to leave Australia in May 2016 and we got to work with Stately making the most of the short time I had before I left. We competed successfully at the 2016 WA State Championships with top 10 placings at Novice level and just prior to my departure competed at the Perth Dressage Club May competition at the SEC. My first ever ride at Elementary level went well and then in difficult conditions Stately reminded us that he is a serious competitor and gave me a fabulous ride for a plus 75% win in the Novice.

Stately is a smart, clever but a quirky individual. He makes every ride a challenge but is always rewarding. He has taught me a lot, the main lesson being patience. Although he can be a little difficult to take out, at times, he has stepped up each time and made me very proud. 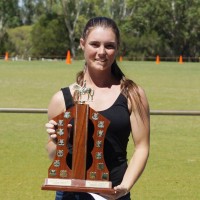 2015 Young Rider Trophy Winner
Jessica Barlett riding Phantom Database with a score of 74.783% winner of the Transitions Young Rider Trophy 2015.
2014 Young Rider Trophy Winner
Fraser Bower riding Don J'amee with 73.426%
2013 Winner Fraser Bower
Don J'amee is a Warmblood Thoroughbred Cross by Demetrius out of Hov's Reminicing. 2013 was the first full season of competition for "Jimmy" and I and I don't think I could be happier with how it went! Being an eventer, I aimed to improve throughout the year with an emphasis on flatwork, as it is my main weakness.

With both the help of my flatwork coach Judy Weber and jumping coach Leone Baxter, we improved immensely moving from EvA95 to One star. Some of our major achievements include winning the Wooroloo II EvA105 class and placing 12th in the Eventing in the Park Grand Prix.

I competed quite successfully in a couple of Official Dressage classes, which I found to be very rewarding. This also made the Dressage phase in Eventing a lot less daunting.

Jimmy has been an absolute pleasure to ride throughout the year. He's got a hilarious character and is never a pain to ride. I am looking forward to the 2014 season and aim to compete in a range of Dressage, Show Jumping and Eventing.

2012 Winner Teagen Sutton
Amberville Rosenstein is an Arabian Warmblood by Elouera Quixote out of Maralinga Summer Edition. 2012 was his first season of Official Dressage Competition which began at the Jill Stanton Serpentine Dressage in February. We have had a fantastic first season both locally in Geraldton and also very competitive in Perth which would not have been possible without my local coach Elizabeth Boyle and visiting coach Judy Weber.

One of “JD’s” greatest attributes is his temperament. He is chilled out, willing to work and will always put in 100% both at competition and work/play at home. One of our major achievements throughout the 2012 season was gaining the Highest Percentage by a local rider at the Leon Baker Dressage Championships, winning a saddle kindly donated by Europa Saddlery Geraldton.

It was great to begin the season at the Jill Stanton Dressage Series, as well as finish it. Our final Official dressage competition was the final part to the series where we were awarded the Preliminary Champion, also the Saddles Plus Novice Champion. Unexpectedly we were also awarded the Ramsay’s Transport Preliminary Leaderboard Dressage Horse of the Year for 2012 at the Guinot Spring Dressage Festival.

Throughout the year we have had a play in the show jumping ring, competing up to 80cm’s and some cross country jumping. I am very excited to begin the 2013 season, get to as many competitions as probable and have fun which wouldn’t be possible with my family and friends support, especially my Mum!
PREVIOUS WINNERS