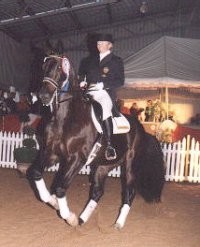 Di lives in Queensland and comes to Perth to hold clinics with Transitions twice a year.

Di's first Grand Prix horse Clavos was like a dream come true, he was such a great horse with a great temperament. He won many titles including Grand Prix Champion in 1986 and 1988.

Her second grand prix horse Adloo Moonshine was a very successful lower level horse and placed highly in grand prix before he was sold to America but he never quite achieved the status of Clavos. Both Clavos and Moonshine were on the elite rider squad. After Adloo Moonshine the next very good horse was the beautiful black gelding called Snowy River Blackwood.

He was very successful through all his lower levels and Blackwood and Di were Austalian Grand Prix Champion in 2000. They were in line to represent their country at the Sydney Olympics but at only nine years of age Blackwood was not quite experienced enough to hold his form up until selection times. Blackwood and Diane continued their success at the Grand Prix level and were never unplaced during their partnership.

Di was fortunate to also partner the fantastic imported mare Florett to several wins at top level at PSG and Intermediate I. Several good judges said their tests were at the time the best at the level ever done in Australia. Di is nowadays very busy with her coaching career but still finds time to produce some of the young horses she and her husband Peter are breeding.

They have a really exciting 5 yr old by Royal Hit that looks the goods for the future and several frozen semen youngsters that are very promising. Di has enjoyed her long time in the top end of the Australian dressage competition scene and now loves to train riders and horses in the sport she will forever feel a part of.

Places fill up on a first-in basis and payment must be received to confirm your spot.